State of the Global Islamic Economy

The State of the Global Islamic Economy Report is now in its seventh Annual Edition and shines an ever-strong spotlight on the 1.8 billion Muslim consumers around the world. This year’s report estimates that Muslims spent US$2.2 trillion in 2018 across the food, pharmaceutical and lifestyle sectors that are impacted by Islamic faith-inspired ethical consumption needs. This spending reflects a healthy 5.2% year-on-year growth and is forecasted to reach US$3.2 trillion by 2024 at a Cumulative Annual Growth Rate (“CAGR”) of 6.2%. In addition, Islamic finance assets were reported to have reached $2.5 trillion in 2018.

With notable developments this past year, the Islamic economy has established an increasingly important footing in the global economy, driven by increasing Muslim consumer demand for dedicated products and services based on Islamic law that has developed the global sub-sectors of halal (permissible) food, cosmetics and pharmaceuticals, Islamic financial services, modest fashion, Muslim-friendly travel, and Islamic-themed media. Global growth is underpinned by 10 key drivers that include high growth and affluence among Muslim populations, increasing adherence to ethical values, continued engagement by global multinationals and investors, and a growing number of national strategies dedicated to halal products and related opportunities.

Several countries have taken the lead in establishing robust ecosystems, with Malaysia leading this report’s Global Islamic Economy Indicator (GIEI) followed by the United Arab Emirates (UAE), Bahrain and Saudi Arabia. Amongst the big movers in this year’s GIEI, Indonesia rose from tenth place in 2018 to fifth place this year, driven by robust initiatives to boost economic growth through developing a dedicated Islamic economy strategy. Meanwhile, Turkey moved up two ranks in the aggregate ranking.

National strategies are driving substantial developments in the Islamic economy, be it Saudi Arabia’s Vision 2030, or the Philippines launching a new halal logo to spur exports, to the South Korean government supporting the development of halal cosmetics and pharmaceuticals. Indonesia’s launch of the Islamic Economics Masterplan (MEKSI) 2019-2024 and the Indonesia Halal Economy Report (by IHLC) is set to be a major game-changer for halal products, with the country of 270 million people set to require mandatory halal certification. While a universally accepted halal standard is still proving to be elusive, steps continue to be taken to improve certification and standards, notably in food, pharmaceuticals, and cosmetics in addition to countries agreeing to mutually accept halal standards. This year’s report highlights the current and potential social impact of each of the Islamic Economy sectors, in line with the United Nations (UN)’s Sustainable Development Goals (SDG) for 2030. Islamic social financing through Zakat and Sadaqah (forms of Islamic philanthropy), has gained major attention of global multi-lateral institutions including the World Bank, UNHCR and UNESCO. Admittedly there is still much room for development, but addressing SDGs is an important way forward for the Islamic economy, so as to develop in a forward-thinking and ethical manner.

"...the Islamic Economy has established an increasingly important footing in the global economy..." 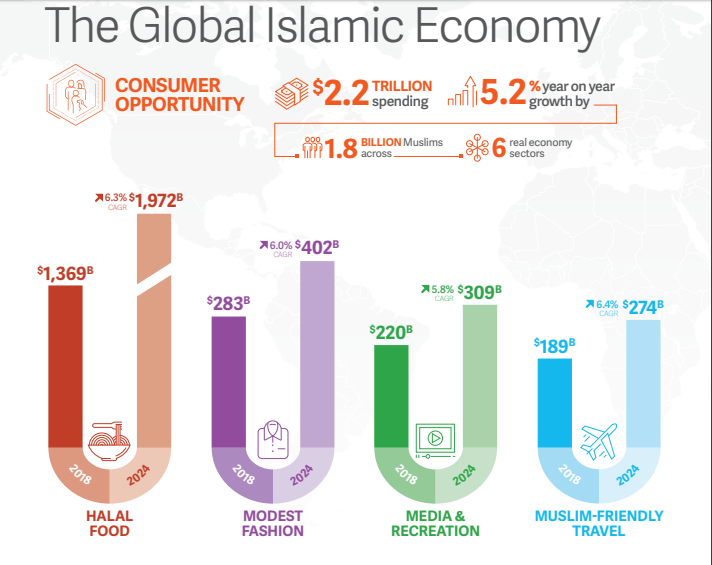